Dovima with elephants by Avedon

And speaking about images I have a hard time deciding which to like best (see Little Joe both clothed and nude in previous entry), there are two images in existence of Dovima with Elephants, both shot by Richard Avedon during the same photo shoot.


Dovima was a 1950's 'supermodel' who pre-dated the term by about 10 years. She was perhaps a muse for Avedon and for many other photographers considering she is the model to some of the best fashion photography of the time.  Avedon made his mark as a fashion photographer by incorporating movement in the genre when the standard was to shoot stiff and posed models.


You can only imagine that in order for the images below to exist as they do, the model had to be attune and quick to the movements of the otherwise uncontrollable props (in this case, the elephants).

In this great image above, Dovima's arched arm mimics the curved trunks of the elephants beside her. Her white and black Dior dress looking impeccable and contrasting with the otherwise general grayness of her surroundings.

And in the bottom one, she appears to be leading a band of elephants (her perfectly placed left foot front and center) while taming their charge with her delicately positioned hands.


Again not a simple feat for either model nor photographer considering how quick they both had to be to capture the right moment.

And to add difficulty to the mix, Avedon is working with a large format camera which slows down the shooting process, there is no quick and rapid succession of shooting as with smaller format cameras using roll film.

We can tell what format Avedon is using here because of the black border around the images. The black borders come into play when the unexposed edges of the film are included in the printing and although this can be done with any format, the markings of these borders (notice it doesn't go all the way around the image) is evidence of the film holder edges one uses when shooting sheet film in large format photography.

The only visible difference in the achievement of these images is that because of the borders, we also know the bottom images is full-frame while the top image has been cropped from the top (the proportion is also not exactly in sync with the sheet film's size).

Yet both remain a testament to Avedon's talent (and Dovima's), I am sure I'm not the only one who can't choose which one is better between the two, it is no wonder they are both considered the iconic images that they are.
Posted by lazaro montano at 8:59 PM No comments:

Another prized-possession of mine is this 'Portraits' portfolio by Richard Avedon. 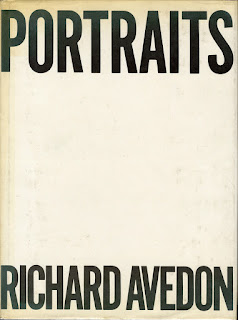 I had become aware of Avedon's fashion photography work when I would browse through magazines. Avedon was still doing the covers for Vogue and was recognized for his early fashion work from the 50s in many photography books.

But one of the two things that make this book so special to me is how I found it. It was in the bottom shelf of a sales book rack in the Fort Lauderdale Main Public Library and cost $2! Yes, just TWO BUCKS!! It was in the mid-80s and I would normally have no money to buy anything, but this book was extremely affordable on my budget.

And the second reason (as if a great bargain wasn't enough) is that the book contains one of  his multi-panel spreads of Andy Warhol with some of his factory members.

And more specifically with 'Little Joe' rendered both clothed and in the nude, perpetually making me unable to decide which one I think he looks better in. The image of him in the left panel, hair pulled back and posed in classical greek sculptural glory...or dressed in all black and boots, hair loose, looking like the urban bohemian his demeanor exudes.
(needless to say, I've had a very long fascination with Joe Dellasandro's image.) 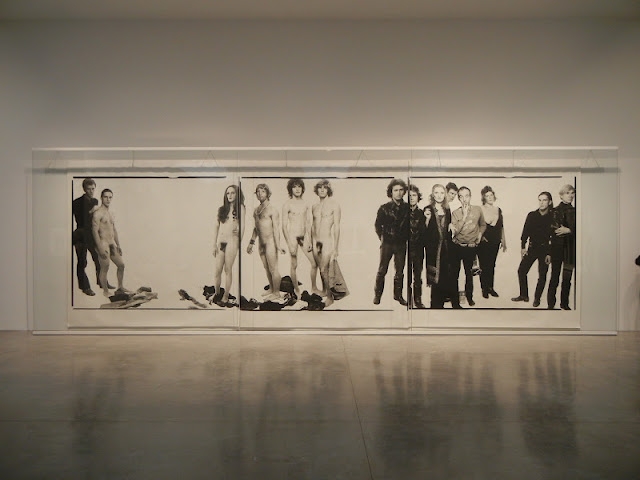 The images from the book were part of an exhibition and it was perhaps one of the first instances photographic images were printed this large in the pre-digital age.

I believe these images are from 2012 exhibition but Avedon (or at least his assistants) were printing  these gelatin-silver photographs in a traditional b&w wet darkroom in the mid-70s. 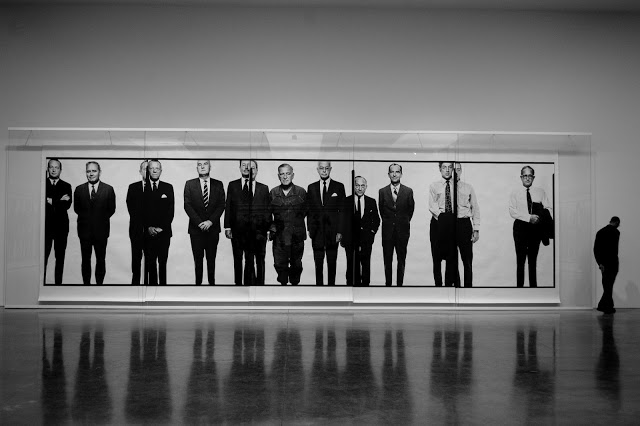 Avedon probably did this scale for several reasons and one of them was probably to create attention and overcompensate for photography's diminutive status in the art world during the 70s.

Just like Warhol, Avedon was very successful in the 'commercial' field at a time when it was rigidly separated from the world of 'fine art'.  He, like Warhol, wanted his work to be taken seriously, so he set out to make his portrait work. He received validation by being one of the first photographers ever given a solo show in a major museum outside photography-designated galleries.

Perhaps as a way to elevate these photographs in the context of 'fine art' he pushed their limits by executing them to the largest size possible at the time. There is no denying these prints deserve a certain kind of respectability and awe merely because of size and execution. But he also emphasized the image's minimalist language by creating a sense of empty space with use of scale.

Posted by lazaro montano at 9:04 PM No comments: 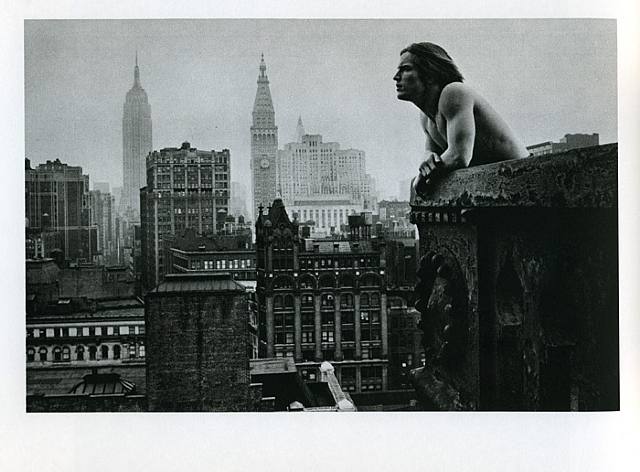 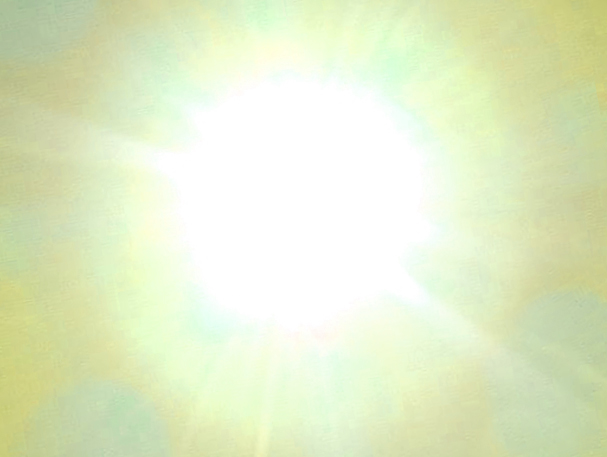 One of the reasons I enjoy his work so much is not only for its uniqueness in execution (his use of hand-written text and sequential images sets him apart) but for the subject matter and narratives he explores. 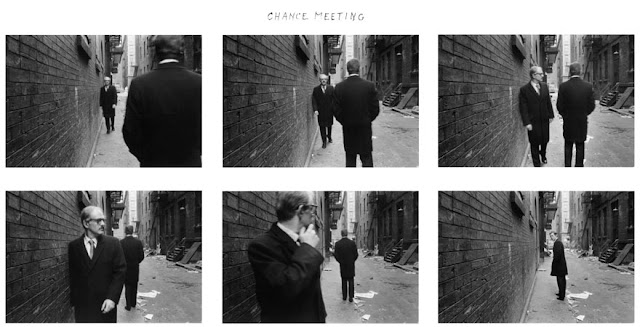 When I first came across this image, I was immediately drawn to the suggestive undertones the 'chance' meeting holds.
And a frustrated encounter to boot.

Posted by lazaro montano at 12:30 AM No comments: 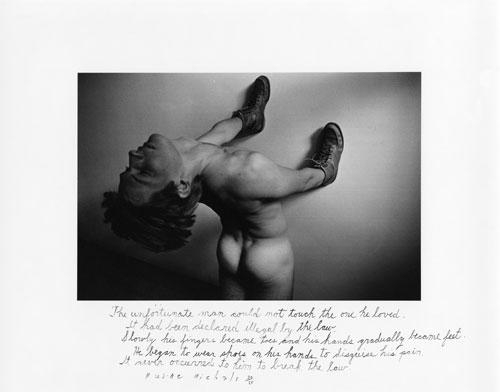 This is the work of Duane Michals. He is the first ‘art photographer’ I was introduced to at a time when I thought photography was either a document or simply vernacular. I had no idea that it could be an expression of something or even tell a story. He was introduced to me in my second year of college by a professor whose name I can’t recall and at a time when I was working in ceramics, frustrated and looking for a means to creatively execute my thoughts and ideas. One of our assignments in this beginning photography class, was to emulate Michals, and I did so by using a slow shutter speed to capture motion and using multiple images to create a simple narrative. Of course, it was deemed successful at the time mostly due to the technique and good execution, however when I look back at them now, I see the naiveness of a student who is new to the medium.

Even though I now know of many photographers I like and find inspiring, Duane Michals is still a photographer whose work I love and admire. His choice of male models at times are a little too-perfect for my taste (some look like adult cherubs), but the way he works and the fact that he uses hand-written text right on the print still feels different and distinguishable from the many photographers out there. Part of my attraction to his work I suppose has to do with our shared affinity in sexual orientation, but years later when I came across an interview with him, I realized we also shared a fascination with death. He, like me, have always been obsessed with the idea of death and mortality since an early age. However he, unlike me, recognized early on in his career that the themes of loss, desire and longing are always ripe for investigation. 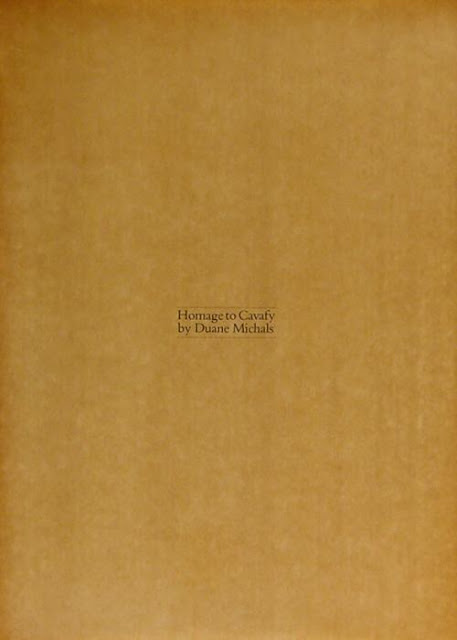 One of my favorite possessions is this small out-of-print book I came across in the 80s. It has Michals’ photographic interpretations of the poems of Constantine Cavafy. Michals visual eroticism paired alongside Cavafy’s poems of nostalgic longing and unrequited love with The Smiths playing continually on my record player is what composed most (if not all) of the angst that was my twenties. 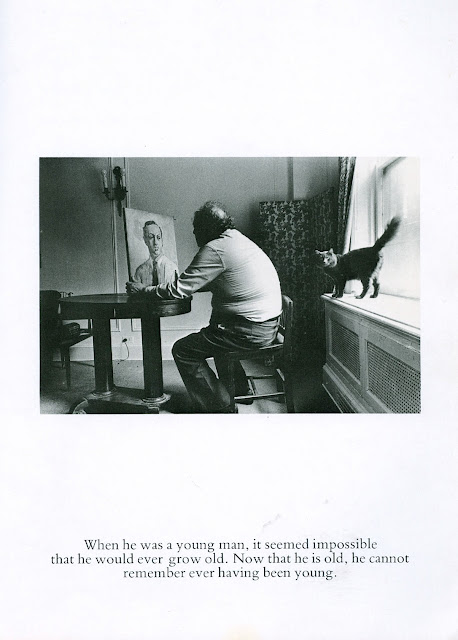 My younger days, my sensual life ---
how clearly I see their meaning now.

But I didn't see the meaning of it then.

In the loose living of my early years
the impulses of my poetry were shaped,
the boundaries of my art were plotted.

That's why the regretting was so fickle.
Any my resolutions to hold back, to change,
lasted two weeks at the most.

Posted by lazaro montano at 8:58 PM No comments:

Posted by lazaro montano at 8:47 PM No comments: