Regardless of this, it is one of my favorite images for several reasons, all of which make a strong argument as to why photography is such a great art-making medium.


First, it proves that you don't need a special event or happening to make a compelling image, through photographic means this ordinary object is transformed into something extra-ordinary thereby affirming that anything can be seen as art.


Weston used light and composition to convert a recognizable object into one that is abstract and suggestive. His use of a tight crop and low vantage point not only isolates the object but allows the scale of the object to be brought into question despite our better understanding of it. This makes this iconic image to become not just one of a pepper but one that allows the mind to wander. Similar to our natural tendency to see recognizable shapes in amorphous clouds, the soft tonal rendering of the organic shape takes on a sensual identity and transforms the vegetable into a seemingly human form.


In doing so, Weston underscores the transcending power of photography and helped establish the medium's relationship to Modernism and art.
Posted by lazaro montano at 11:16 PM No comments:

Garry Winogrand is considered one of the masters of street photography from the late 20th century. His career was forged by John Szarkowski during his tenure as Director of the Photography Department at MoMA and it culminated in establishing Winogrand's place in photographic history.

Winogrand is the author of many great images that give us a candid glimpse of the American social landscape of the 60s and 70s. This is partly due to the fact that he was extremely prolific.  At the time of his death he left thousands of undeveloped rolls of film along with even more developed but unedited ones.

The image above, New York World's Fair, 1964, is perhaps one of his better known images.


It is said that Winogrand depicted the social issues of his time, so the date the image was made is extremely important since it informs its content. At first glance, the image is a visual play of body language with a tightly cropped composition and strong diagonal horizon accentuated by a slight tilt of the camera. But the year it was taken places it during the early years of the Civil Rights Movement and thus gives the image an added interpretation.


On the left side of the image, we see an African-American man in conversation with a Caucasian woman. Directly next to them sit three young women engaged in a secretive conversation, what they discuss is left for speculation, however they do take on a comic nod to the classic see/hear/and speak no evil gestures.


Following them is two more young women drastically turning away looking towards the distance and finally the image is book-ended by an older white male reading the newspaper and almost outside the frame.

What is most interesting to me is Winogrand's composition. As a street photographer, you have little if no control of your subject's actions, you must simply compose and capture the right moment at the right place from the right point of view (not an easy feat and one that distinguishes the success of good photo-journalists). Although Winogrand is shooting from the side which already gives him the diagonal nature of the horizon line, he also (purposefully?) tilted the camera. This simple gesture creates a sea-saw effect of sorts with the overly-crowded park bench and one in which can denote some social upheaval. Given Winogrand's sophistication in shooting, I would assume the depiction of a young generation in constant motion and unrest as they literally push a stand-in for the older white patriarchal establishment out of the frame, is no accident.


The loaded question is whether Winogrand was celebrating, critiquing or simply overemphasizing the reading. If the image would have been directly shot at a level this reading would not be as clear, chances are the focus would have been mostly on the three huddled women at center. The question only arises with the use of the camera tilt, what it suggests and what the photographer was trying to communicate by doing so.
Posted by lazaro montano at 12:43 AM No comments: 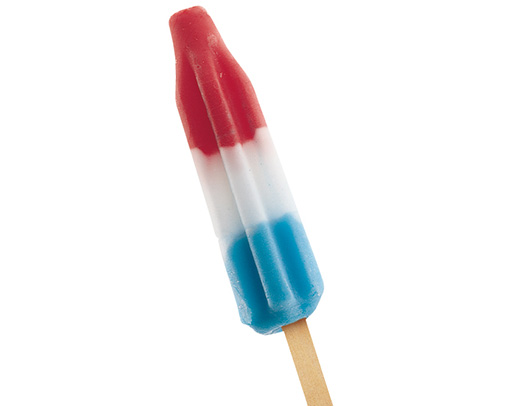 Nothing says U.S.A! like a Frozen Rocket Popsicle!
Happy Fourth!
Posted by lazaro montano at 9:00 AM No comments: