One of Almodovar's early films and arguably one of his best. It is not so much a 'gay' movie but one that can apply collectively to the universal subject of love and desire. Of course, as with many of Almodovar's story-telling,  this is not your typical story of love, but the more obsessive, all-consuming and self-destructive version, the type of passionate love you wish you would be a part of but glad it hasn't happened to you. It could perhaps be compared in plot to the American film Fatal Attraction. But instead of fearing the obsessiveness of an emotionally unhinged one-night-stand you actually feel sympathetic and understanding of the stalker's motives despite his actions.

Almodovar's genius can be seen not only in the beautifully shot imagery full of color and  layered simplicity but it his writing and wit as well. He is truly a master in his craft, referencing Hollywood classics alongside current parallels, his cleverly chooses music to accompany his visuals. He chose a song performed by a long-forgotten Mexican trio from the 1950s, Los Panchos. Here he superimposes the song's plucking of guitar strings with the pounding of typewriter keys as if to insinuate that what is being written is what is being heard, the lyrics to the song become a surrogate to dialogue. But where Almodovar truly shines (and not just in this film) is with his original screenplay, always rendering an out-of-the-ordinary story with an unexpected outcome. He interweaves comedy and suspense, love and fear, camp and drama seamlessly from one scene to another and with every plot twist and turn. In Law of Desire, he plays with your perception and understanding of sex and sexuality by casting Carmen Maura (a famous Spanish actress) as a transexual woman longing for love and normalcy and an actual transexual actress as a heterosexual mother seeking to break free from the binding responsibility of parenting. Ms. Maura gives an Oscar worthy performance capturing the mixed emotions of a tortured soul celebrating the liberating freedom of gender reassignment with a desperate need for love and acceptance.

Considering this movie was made in 1987 when many of the subject matter in this film was not only misunderstood but also taboo establishes it as both innovative and groundbreaking. But what is most surprising is the realization that it received wide distribution and acclaim in its country of origin, it had been less than 20 years that Spain had been released from the shackles of the righteous four-decade long dictatorship of General Franco, and this movie's mainstream acceptance in a country with strong Catholic heritage just shows the level of liberal cultural revolution Spain was going through at the time. You would be hard pressed to find a movie similar in plot to be made in the United States even today....lo dudo (I doubt it)! 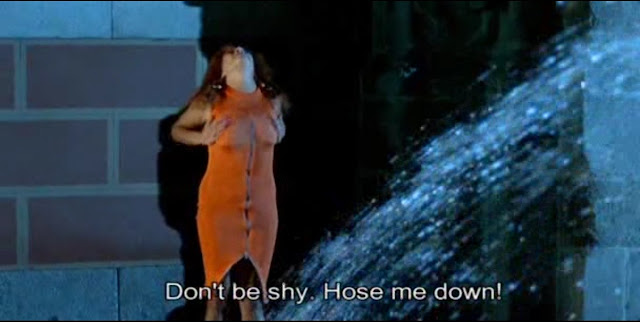 Posted by lazaro montano at 9:14 PM